In one of my previous posts, I mentioned Allyn Johnston’s and Marla Frazee’s wise words about picture book endings. Yes, endings should disarm us. They must have a touch of mystery, a touch of magic and space for the reader to fill in or ponder.

But let me offer this:

Equally as important is what happens right before the ending. It’s that scene reaching a crescendo, that then allows for the satisfaction felt at the sublime ending. 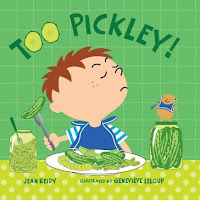 Take, for example, the “Too Pee-Yooey” page in Too Pickley! This two-page spread, the octopus soup and the child’s screwed up face all allow the reader/listener to conclude that enough is enough. We’ve reached an epicurean climax and we’re ready for the relief of “So yummy. All done.”

Let’s look at a few other picture books to see what happens right before the end. 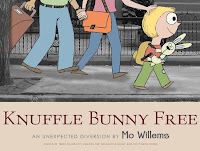 Knuffle Bunny Free – Trixie finds Knuffle Bunny in the seat pocket of the plane. On a two page spread Trixie shouts, “KNUFFLE BUNNY!!!” Clearly at this point the reader/listener is just as thrilled and relieved as Trixie – which sets us up for the complete poignancy of Trixie’s gift and the perfect ending to the series. 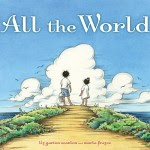 All the World – The poem has built to a crescendo incorporating the grand notions of “Hope and peace and love and trust” on a two-page spread showing a majestic sky and darkened landscape, before bringing the story back to the tender and very personal ending of “All the world is all of us” and the illustration of a single child with a mystery in her hands.

Lilly’s Purple Plastic Purse – Lily gives cookies and an note of apology to Mr. Slinger. She also tells him she’s really, really, really sorry. Mr. Slinger asks Lily what he should do with her original horrid note. Yes, a few pages back Lily opens her purse and sees the kind note from Mr. Slinger which triggers her remorse. But the ultimate confrontation – especially for a kid – is to own up to what they’ve done in front of the person they’ve hurt. This apology is 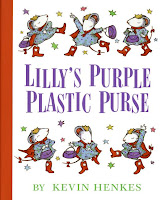 an emotional crescendo for any child reader/listener and perfectly sets up Mr. Slinger’s totally awesome teacher behavior and Lily’s resolve to be a teacher – making both that much sweeter.

So take a look at other picture book arcs. The scene right before the ending might reveal the ultimate trouble, the ultimate mess, the ultimate confrontation – very much like the climax in a novel or the final showdown.

If this crescendo occurs too soon, the story might feel like it’s going on too long as you wrap things up. And if it occurs right at the end, your reader might feel cheated out of a satisfying full circle of emotions. But if you reach that high point right before your perfect ending your readers will then parachute into the sublime satisfaction of that final page.

11 Responses to “Points From PB Peeks: What Happens Right Before Your Ending?”

Friends, I'm so excited. In just one week, ME AND YOU IN A BOOK MADE FOR TWO (from @HarperChildrens, @choochoojoey… https://t.co/VDrsDpStCK
- Tuesday Aug 16 - 6:12pm

I'd be curious to know exactly how many cars, trucks, buses and trains there are in the entire city of Chicago. Bec… https://t.co/sIB9NTDhP7
- Monday Aug 15 - 8:05pm