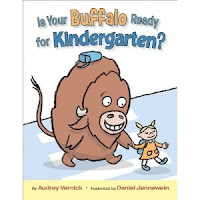 Last summer when I traveled to Uganda I was quite picky about my traveling companions. They had to be fun, hardy and have a LOT of heart. That’s why Audrey Vernick’s buffalo made the cut. 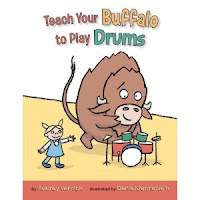 Now, in Audrey’s latest book, in bookstores June 28th, our favorite buffalo has got the beat. He’s learning to play the drums! YES! And he’s sure to leave his mark, not only on the music world but on the children’s literary world as well. WOOHOO! Check it out!

Of course, this news begs the question “What will he do next?”

Brainstorming for buffalo ideas has everything to do with Daniel Jennewein, the illustrator of IS YOUR BUFFALO READY FOR KINDERGARTEN? and TEACH YOUR BUFFALO TO PLAY DRUMS. The buffalo I first wrote about was just this idea of a buffalo until Daniel brought him to life. The ideas I envision now are very closely tied to the images he created; there’s no way to separate them.

I cannot resist the impulse to put my buffalo in costumes and give him props, which is why both the Winter and Summer Olympics really call me. I would love to see the buffalo go for gold. The publishing reality of that, of course, is a pretty tiny sales/marketing window, and so I’m sure it won’t happen, but just envision: Speedo/goggle-clad Buffalo in the 400-meter medley, competitive trampoline, fencing, canoe. For the winter sports–bobsled, ski jump, curling, figure skating (pairs).

All I have to do is think it and I can see what Daniel would come up with, and well, that’s a party in my head. When I think about brainstorming in general, as requested by my lovely host, I stumbled upon a surprising reality: I don’t really brainstorm. (How’s that for an engaging guest blog post?) An idea comes to me–via something I say or think–and I weigh it for story potential.

I am at my least creative when actively seeking ideas, a true brainstormer’s worst nightmare. But because my buffalo already exists, he’s an exception. I stink at brainstorming from scratch, but I had one heck of a good time coming up with this bucket list for my buffalo.

Jean, thank you for giving me the opportunity to answer one of the best questions I’ve ever been asked. Buffalo’s Bucket List. That, my friend, is an award winner.

Audrey! I love it. So the Buffalo is a Yankees fan? Who would have guessed? And don’t be surprised if some seamstress fan doesn’t fashion that buffalo Speedo for him in time for London 2012. Thanks so much Audrey for stopping by. We can’t wait until June 28th!

For these and Audrey’s other award-winning books visit her website at http://www.audreyvernick.com/index.html.

And don’t forget to keep up with Audrey and her drum-playing sidekick at these other blog tour stops:
June 29th with Peter Salomon at http://www.peteradamsalomon.com/blog/
July 6th with Ruth McNally Barshaw at http://elliemcdoodle.blogspot.com
July 13th with Laurie Thompson at http://lauriethompson.com

Now let’s open it up. Do any of you buffalo fans have “to dos” to add to his list? Let Audrey know in the comments section below.