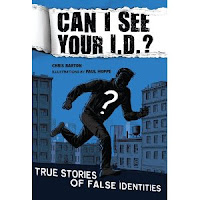 Bestselling children’s author, Chris Barton, is known for his award-winning picture books The Day Glo Brothers and Shark Vs. Train. But these days, he’s donning a new disguise – or genre, if you will.

So I had a chance to ask Chris, “If you could assume the identity of any literary figures who would make it to your top 5?”

I was positive that his #1 would be the Shark from Shark Vs. Train. However, being the creative and completely noble guy that he is, his answer took a surprising twist.

Here’s what Chris had to say:

“Over the years, I did a long series of blog posts (http://chrisbarton.info/blog/labels/us_history_reading) about children’s books covering various periods of U.S. history, and I can think of *lots* of real-life figures from those books that I would like to be:

• Cesar Chavez: Because of the courage he managed to summon and the way he transformed the lives of so many people taken for granted.

• Madam C.J. Walker: So few people can say they’ve done something no one else before them has done. When you’re the first African-American woman millionaire, it’s a different story.

• Charles Ives: He heard unusual sounds in his head and brought them into this world in dynamic fashion, all while keeping his day job.

• Lt. Gail S. Halvorsen: Adored, even revered, by the former children of East Berlin to this day, more than six decades after the Berlin airlift.

• Joe Switzer: His brother Bob left behind an extensive first-person account of how the two of them worked together to, among other things, invent Day-Glo. I’d love to know Joe’s perspective firsthand.“

Wow! What a guy! WHAT A GUY! Now I get why the Shark didn’t make the list.

Get to know Chris and his fabulous new book at his other blog tour stops:

You can also follow Chris and his amazing kid lit adventures at:

And don’t forget to check out Can I See Your I.D?

Posted May 2, 2011 & filed under Great Reads, Marketing Minutes, News to Use, Stops and Sightings.

Have a wonderful holiday weekend, friends, and then get ready for ... A GRAND DAY! Celebrating grandparents and gra… https://t.co/HyLUNHXkAN
- Friday Jul 1 - 7:00pm

I was absolutely thrilled when @grnfldschool selected WHAT WOULD YOU DO IN A BOOK ABOUT YOU? as inspiration for the… https://t.co/5zUtNupa3d
- Thursday Jun 30 - 5:25pm

There's no passing up a cute dog with a book - especially when linked to this wonderful Beagles & Books review of S… https://t.co/3b1DAfx0BP
- Wednesday Jun 29 - 1:58pm