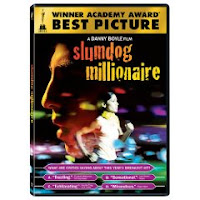 I must be the last person on Earth to have seen SLUM DOG MILLIONAIRE. But I’d heard so many wonderful things about it – aside from all the Oscars – I waited for a night when I was well-rested enough to take it all in. Well I’m still waiting to feel well-rested, but I finally said, “To heck with rest, if this movie’s that great, it’ll keep me awake.” And lo, it did.

But perhaps my favorite scene falls near the end when Jamal calls Latika as a lifeline on his brother’s cell phone. I’m not going to ramble on about the striking symbolism of the scene, but I have to admit one of the main reasons I loved it so much was that I saw it coming.

SLUMDOG’s plot was far from predictable – truly one of the most clever and creative I’ve seen. I knew, from those who saw it first, that the story had at least a glimmer of a happy ending. So once Samir’s cell phone became prominent and I guessed its end significance, I wanted it to happen. I had to have it happen. The story had to end that way or I would have been disappointed. Unless of course an equally poignant and satisfying reason for the phone was substituted.

A plot problem, for me, would have been if the phone ultimately carried minor or no significance. For example, if instead Jamal had simply called his brother after the show and reached Samir. The “life line” point provided a strong plot link and brought so many pieces full circle to a perfect ending.

A few months ago, we rented THE LIFE OF DAVID GALE, another thought-provoking movie. There too, shortly before the end, I predicted the ending and was satisfied in doing so.

Obvious, you say. Well I’ve read a few books and seen a few movies in which I predict what I think is an ideal ending or plot point and it doesn’t turn out that way. I’m left dissatisfied. I’m left wondering what the author did – what hints he/she dropped – to lead me down the wrong path. I’m not talking about the red herrings of a great mystery. I’m talking about surprises that leave me stumped. I’m talking about an unfulfilled story promise.

So now it’s your turn.

How does an author create satisfying surprises? Or how does he/she create predictable plot points that fulfill the story promise without boring the reader? I’d love to hear your thoughts.